“Soybean harvest is nearing completion with corn close behind and farmers are also busy with other fall field work as conditions allow,” said Secretary Naig. “Portions of the state received nearly a month’s worth of badly needed moisture last week. Looking ahead, we will see a few more days of warm and dry conditions before a weather pattern change ushers in colder air.”

Harvest of the corn for grain crop reached 89 percent complete, 6 days ahead of last year and 11 days ahead of the average. Moisture content of field corn being harvested for grain remained 17 percent.

Livestock were mostly doing well, with some reports of calves being treated for pneumonia.

Much-needed and above-average rainfall was observed across the southeastern half of Iowa through the first week of November. Positive departures between two to three inches were common at several south-central and eastern stations. Unseasonably warm temperatures also blanketed the state with a statewide average temperature of 51.0 degrees, 8.3 degrees above normal.

Showers spun into Iowa’s southeastern corner through early Sunday (30th) afternoon as generally clear, warm conditions were reported across the rest of the state. Several stations reported a few tenths of an inch with a gauge in New London (Henry County) measuring 0.34 inch. Daytime temperatures reached into the mid 60s in western and southern Iowa with upper 50s in the northeast. A wide range of overnight lows spanned the state with mid 20s in the northwest to low 50s southeast reported at 7:00 am on Monday (31st). Winds out of the west and sunny skies held afternoon temperatures in the mid to upper 60s as high pressure dominated the Midwest. Winds shifted to a southerly direction into Tuesday (1st) with unseasonably warm temperatures in the mid to upper 70s statewide under clear skies. Overnight conditions were cloudless as temperatures held in the upper 40s and low 50s with southerly winds becoming blustery on Wednesday (2nd). Daytime highs pushed into the 70s for a second day as sustained winds held in the 20 to 30-mph range in northwestern Iowa; the statewide average high was 74 degrees, 21 degrees above normal.

Cloud cover increased west to east into Thursday (3rd) morning as a low pressure system approached Iowa from the west. Gusty southerly winds continued, pumping moisture into the Midwest as highs ranged from the upper 60s north to mid 70s south. Showers began forming in western Iowa after sunset as the low pressure center pushed across Iowa. Widespread showers and some thunderstorms continued overnight and through Friday (4th) leaving behind beneficial totals over much of Iowa. Dreary conditions were observed throughout the day as rain continued and highs hovered in the upper 30s and low 40s. The system held on in eastern Iowa through Saturday (5th) afternoon as sunshine broke out in western Iowa. Most Iowa stations reported measurable totals from the event with nearly 100 stations measuring at least an inch. More than 50 stations observed two or more inches with stations in south-central Iowa reporting the highest totals; Lamoni (Decatur County) dumped out 3.51 inches while Osceola (Clarke County) reported 4.18 inches. As clouds dissipated, temperatures rebounded into the 50s west while mid 40s were present in eastern Iowa. Winds shifted to a southerly direction late in the night before swinging back around the west by sunrise on Sunday (6th). Morning lows were warmer than average with mid to upper 40s over northern Iowa with warmer conditions farther south.

Weekly rain totals ranged from 0.01 inch at Estherville Municipal Airport (Emmet County) to 4.30 inches in Osceola. The statewide weekly average rainfall was 1.47 inches; the normal is 0.54 inch. Lamoni (Decatur County) and Little Sioux (Harrison County) reported the week’s high temperature of 80 degrees on the 2nd, on average 24 degrees above normal. Sibley (Osceola County) and Sioux City Airport (Woodbury County) reported the week’s low temperature of 23 degrees on the 5th, on average five degrees below normal. Four-inch soil temperatures were in the mid 40s north to low 50s south as of Sunday. 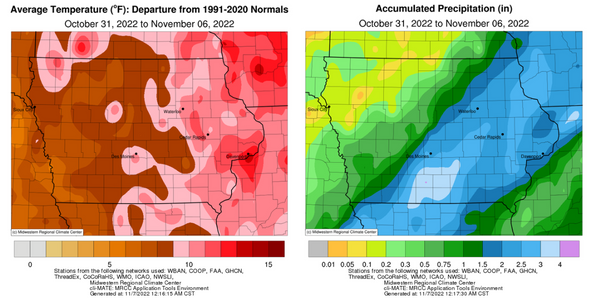