“With the State Fair set to open on Thursday, fairgoers are looking forward to sampling new foods, revisiting longstanding traditions and taking in all things Iowa agriculture,” said Secretary Naig. “Temperatures are looking to be warmer than average with only minor chances of rain over the coming weeks. With these persistent conditions, we continue to monitor drought across northwestern and southern Iowa.”

Precipitation early in the week for a few areas and late in the week for much of the State resulted in 6.1 days suitable for fieldwork during the week ending August 7, 2022, according to the USDA, National Agricultural Statistics Service. Persistent dry conditions and above-average temperatures are a concern for many. Fieldwork included cutting and baling hay and applying pesticides and fungicides.

The final month of meteorological summer began warm and unseasonably dry. Temperatures over the reporting period were nearly six degrees above normal with heat index values at many stations in the triple digits over several days; the statewide average temperature was 77.2 degrees, 5.2 degrees above normal. Coupled with the unseasonably warm conditions, dryness persisted across the southwestern three-quarters of Iowa; rainfall deficits of over an inch were reported in central Iowa, while more than two inches of above-average rainfall was observed at multiple stations in northern Iowa.

Gusty southerly winds built in through Sunday (31st) afternoon with partly cloudy skies and high temperatures ranging from the upper 80s northwest to low 80s southeast. Isolated thundershowers popped up in northwestern Iowa earlier in the day and then again in the late evening hours over eastern Iowa. A few cells within the line were severe-warned after midnight and raced southeast through the early morning hours of Monday (1st). A handful of stations along the path reported heavier downpours with a gauge near Solon (Johnson County) measuring 1.78 inches; four other stations reported at least an inch. Daytime temperatures were near-seasonal across northern Iowa with isolated mid-90 degree readings in southwestern Iowa. Another isolated severe-warned thunderstorm fired in north-central Iowa, expanding into a smaller line and propagating into southeastern Iowa before sunrise on Tuesday (2nd). Higher rain totals fell along the narrow swath with Gilbert (Story County) observing 0.78 inch while West Liberty (Muscatine County) observed 0.89 inch. Southerly winds, sunny skies and dew point temperatures in the 70s produced sweltering conditions over the afternoon hours with highs in the mid to upper 90s statewide along with a few triple-digit readings; the statewide average high was 93 degrees, nine degrees above normal. Overnight lows remained unseasonably warm into Wednesday (3rd) with low 70s north to upper 70s south as a low pressure center approached western Iowa. Showers and thunderstorms formed along and ahead of the attendant cold front through the day with a few severe storms forming in eastern Iowa. Widespread rainfall was reported across much of eastern Iowa with totals generally between 0.20 to 0.40 inch. Manchester (Delaware County) measured 2.11 inches from stronger and slow-moving thunderstorms.

Cooler temperatures filtered in behind the cold front with morning lows on Thursday (4th) in the mid 50s north to mid 60s south. Variable winds and sunny skies lent to a pleasant afternoon with daytime highs in the 80s. Winds shifted to an easterly direction on Friday (5th) with hazy skies reported from high-level wildfire smoke. Temperatures warmed back up into the upper 80s and low 90s as winds shifted back to a southerly direction into Saturday (6th) morning. Another low pressure system initially brought showers and thunderstorms across Iowa’s northern quarter before an additional wave brought widespread and heavy rainfall over Iowa’s northern one-third. Southern Iowa, where sunny skies were present, experienced hot temperatures in the upper 90s while cloud cover held temperatures in the 80s north. Rain totals reported on Sunday (7th) morning were in north-central and northeast Iowa where strong to severe storms formed. Over forty stations measured at least an inch with 15 of those stations observing over three inches; Forest City (Winnebago County) dumped out 3.75 inches while Anamosa registered 4.50 inches.

Weekly precipitation totals ranged from no accumulation at several west-central stations to 4.86 inches at Manchester. The statewide weekly average precipitation was 0.88 inch while the normal is 0.91 inch. Sioux City Airport (Woodbury County) reported the week’s high temperature of 102 degrees on the 2nd, 18 degrees above normal. Spencer Municipal Airport (Clay County) reported the week’s low temperature of 52 degrees on the 4th, nine degrees below normal. 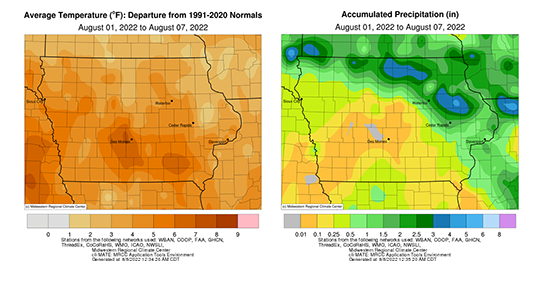