“After another warm week statewide, corn pollination is nearly complete for portions of Iowa as soybeans continue to bloom and set pods,” said Secretary Naig. “Much of Iowa received at least some rain, though not enough to ease drought conditions. Forecasts show near-seasonal temperatures and isolated chances of rain through the end of July.”

Limited rain over much of Iowa resulted in 6.1 days suitable for fieldwork during the week ending July 24, 2022, according to the USDA National Agricultural Statistics Service. Fieldwork included cutting hay as well as insecticide and fungicide applications.

Seventy-seven percent of the state’s second cutting of alfalfa hay was complete, with the third cutting under way at 3 percent. All hay condition rated 66 percent good to excellent. Pasture condition rated 50 percent good to excellent. Some producers already had to begin supplementing with hay. Flies and above average heat and humidity were stressing livestock with cattle still struggling with pinkeye.

Iowa experienced hot and humid conditions for much of the reporting period with positive departures of up to six degrees across the state. The statewide average temperature came in at 77.2 degrees, 2.7 degrees above normal. Rain fell over much of the state, though only the northeastern corner measured above-average totals from stronger thunderstorms. Many counties along the Iowa-Missouri border missed out on rainfall with departures approaching one inch with up to 0.50 inch at the remaining stations.

Light rain showers pushed out of southeastern Iowa by noon on Sunday (17th) with partly cloudy skies persisting through the afternoon and evening. Daytime temperatures remained in the low to mid 80s with a light northerly wind. Overnight temperatures into Monday (18th) dropped into the low to mid 60s with pockets of fog at stations in southern Iowa. A shifting southerly wind and generally clear skies pushed highs into the upper 80s and low 90s as a low pressure center approached southern Minnesota from the Dakotas. Southerly winds increased through the latter part of the day, helping hold Tuesday (19th) morning temperatures in the upper 60s and low 70s. The low skirted the Iowa-Minnesota border through the day with isolated thundershowers forming along the attendant cold front in north-central Iowa; several stations picked up a few hundredths of an inch. Afternoon conditions were muggy with temperatures hitting the low 90s in southern Iowa with slightly cooler conditions in northwestern Iowa, behind the passing front. Winds again shifted, turning westerly into the early hours of Wednesday (20th) with lows holding in the mid 60s northwest to low 70s southeast as the sun rose. By late afternoon, winds were gusting out of the northwest, dropping the relative humidity with highs holding in the low to mid 80s under sunny skies.

An isolated complex of thunderstorms pushed into extreme northeastern Iowa around sunrise on Thursday (21st), producing a pocket of moderate rainfall; a gauge in Decorah (Winneshiek County) measured 0.66 inch. A weak cold front dropped southeast across Iowa through the day, creating a stark temperature gradient; low 80s were reported in the north, while low to mid 90s were observed south. Cloud cover increased in western Iowa overnight as a disturbance brought showers and thunderstorms into Iowa’s western half with a severe-warned cell producing wind damage and heavy rainfall, amounting to 0.63 inch, in Orange City (Sioux County).  Showers persisted into Friday (22nd) morning as cloud cover burned off into the afternoon. High temperatures jumped into the low 90s in southwest Iowa with upper 80s reported over the rest of the state. Additional thunderstorms, some severe, fired in eastern Iowa after midnight on Saturday (23rd). Heavier totals were measured in east-central Iowa with DeWitt (Clinton County) reporting 0.51 inch while 0.88 inch was observed in Anamosa (Jones County). Event totals for stations measuring rainfall were generally at or below a few tenths of an inch. A potent low pressure system pushed through Iowa during the afternoon and evening hours, producing two waves of severe thunderstorms. Daytime highs rapidly warmed into the mid to upper 90s in southern Iowa with upper 80s in the northern counties. The first thunderstorm complex moved over northeastern Iowa with a second line forming in western Iowa during the evening hours. The line lost energy over central Iowa but then turned severe in eastern Iowa, where high wind reports were found from Decorah to Hopkinton (Delaware County) and east. The highest totals measured at 7:00 am on Sunday (24th) ranged from 1.05 inches at Lake Mills (Winnebago County) to 3.82 inches in Calmar (Winneshiek County). General totals across Iowa’s northern half were between 0.25 to 0.75 inch.

Weekly rain totals ranged from no accumulation at southern Iowa stations to 3.88 inches at Calmar. The statewide weekly average rainfall was 0.37 inch while the normal is 1.00 inch. The National Weather Service office in Johnston (Polk County) and Newton (Jasper County) reported the week’s high temperature of 100 degrees on the 23rd, 15 degrees above normal. Stanley (Buchanan County) reported the week’s low temperature of 55 degrees on the 22nd, four degrees below normal. 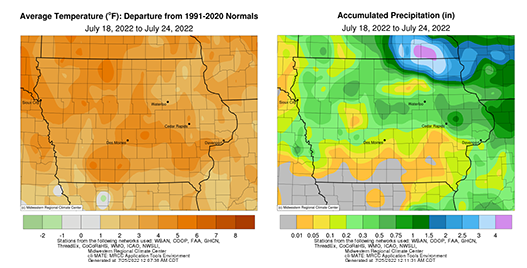