“Near-average temperatures and timely rainfall helped push along tasseling corn over the past week,” said Secretary Naig. “As county fair season ramps up, outlooks show hot and dry conditions will develop over the next week as limited chances of rain will increase the likelihood of drought expansion in northwest Iowa.”

Little precipitation and above average temperatures resulted in 5.6 days suitable for fieldwork during the week ending July 17, 2022, according to the USDA, National Agricultural Statistics Service. Fieldwork included cutting hay and starting fungicide applications.

Temperatures over the reporting period were slightly warmer than average in western Iowa with near-normal conditions in eastern Iowa. The statewide average temperature registered at 74.8 degrees, a tenth of a degree below normal. Widespread rainfall was also reported across Iowa with wetter than average conditions along the Iowa-Wisconsin border, where over two inches of above-average totals were observed. The remainder of the state was drier than normal with negative totals approaching one inch.

Southerly winds increased into Sunday (10th) afternoon with high temperatures ranging from the upper 80s west to low 80s east under sunny skies. Clouds increased overnight as a disturbance pushed into western Iowa, firing a complex of severe thunderstorms that raced through the central portion of the state before pushing out of eastern Iowa by Monday (11th) morning. A county-wide band of at least 0.50 inch was observed from Monona County to Johnson County. Several stations in central Iowa reported at least an inch with Story City (Story County) measuring 1.90 inches. Light rain showers persisted through the afternoon hours leaving behind widespread though very light totals that were generally less than a tenth of an inch. Winds shifted to the northwest as highs hovered in the low to mid 80s under clearing skies. High pressure built into the Midwest on Tuesday (12th) filtering in very patchy cloud cover over portions of the state. Daytime temperatures were near-seasonal with a light north-north westerly wind. A weak cold front dropped into northeastern Iowa after midnight on Wednesday (13th) bringing light showers to a few counties. Morning temperatures dipped into the upper 50s and low 60s with a light, variable wind and patchy fog in southwest Iowa. Partly cloudy skies remained across much of eastern Iowa with temperatures in the low 80s north to upper 80s south. Spotty showers formed in east-central Iowa very early on Thursday (14th) morning leaving behind isolated and light totals.

Another low pressure system pushed through Iowa into the evening and overnight hours, bringing locally heavy rainfall to northeastern Iowa. Additional storms formed along a cold front as the low moved east, leaving behind widespread rain to much of Iowa. The system persisted through Friday (15th) morning before dissipating after noon. Event totals were highest in the northeast with over 25 stations measuring an inch and a statewide average of 0.35 inch; four stations measured at least three inches with Dubuque Lock and Dam (Dubuque County) registering 3.79 inches. Daytime highs reached into the low to mid 90s in south-central Iowa with upper 70s in the northeast. Widespread and locally dense fog developed prior to sunrise on Saturday (16th) with unseasonably warm low temperatures in the upper 60s and low 70s. Scattered showers moved into western Iowa and expanded into central Iowa over the evening and nighttime hours as temperatures held in the mid to upper 60s. Rain totals reported at 7:00 am on Sunday (17th) were on the light side with Sanborn (O’Brien County) measuring 0.16 inch. 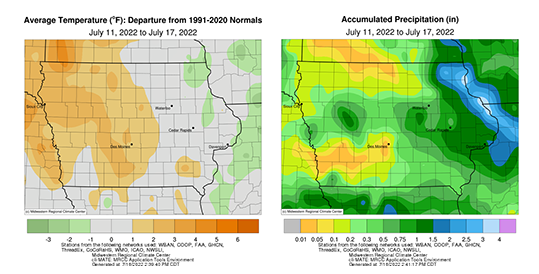